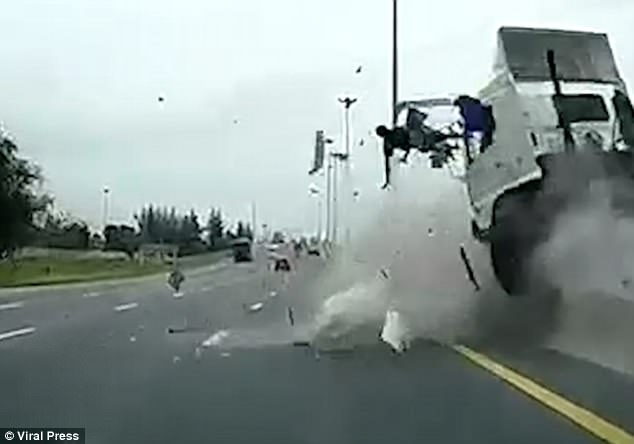 This is the terrifying moment a truck driver is hurled from his cabin into an oncoming car caught on a dashcam- after falling asleep at the wheel without a seat belt.
The driver Yuttapong Hawilee, 39, lost control of the vehicle and swerved across four lanes crashing into a cement barrier in Chonburi, Thailand yesterday, at 10.30am.

Dashcam footage from the oncoming vehicle in the opposite lane shows how the truck driver was flung from the cabin into his Honda.
Rescuers arrived and rushed Yuttapong to hospital but he died several hours later from his injuries.

Police are now investigating what caused the accident amid fears that the trucker may have fallen asleep at the wheel which caused him to loose control. There was no onboard camera on the truck so no hard proof of his misconduct can be seen.

Police Lieutenant Pornchai Jiampongpaisal said: ‘We know that the trailer suddenly crashed into the barrier but we have to find the cause of this.
‘From the preliminary investigation we believe the tow truck driver may be falling asleep or may be dodging another car. We know he was not wearing a seat belt.’

The Honda Accord that Yuttapong unfortunately  landed on was towed away to be repaired and the driver was uninjured.

When it comes to accidents and injuries it is always best to have some sort of proof of what caused the accident, if you do not have a fleet management system on your fleet vehicles, at the very least have a fleet camera system